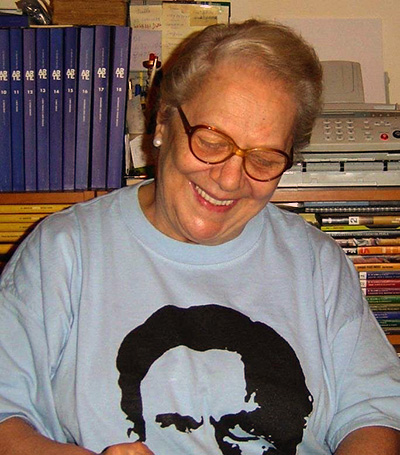 In 1997 Angela Molteni and a 22 years old student created the website www.pasolini.net . This was the beginning of an extraordinary cultural adventure in which Angela put together lots of aspects of herself and of her literary, cultural and civil competences. From one hand there was her professional competence in the editorial field, reached during her collaborations with many publishing houses; on the other hand there was her passionate and willing involvement in the promotion of Pasolini’s work, especially among young people and the divulgation of  a myriad of activities all over the world in order to enhance its ever-current meaning: some essays contained in the ever- expending critical biography, or else the journalistic and militant material, or some promotional manifestations and conventions; or finally theatrical, cinematographic and musical artistic works. From the year of its foundation the website has attracted a copious group of collaborators and friends thanks to its “pagine corsare” and it has increased to the point of becoming the wider widespread on line archive of Pasolini’s material. It reaches 5 million visitors from more than 60 countries in the world and contains about 13.000 documents, divided into different sections. In 2012 an independent blog was also created but its update was suspended because of the unexpected death of its author after a devasting disease. After the last news published by Angela Molteni in October 2013 the management of the blog was given to Pier Paolo Pasolini Study Centre. The blog entitled “Angela Molteni’s Archive” and the corpus of “Pagine Corsare” are operative at the Study Centre’s website that recovers the pages published by Angela Molteni and keeps loading files following the author and her family’s intentions.  The director of the study Centre, Angela Felice, is responsible for its redaction and leads a group of collaborators, among which participate Giacomo Trevisan and Alessandro Scialpi.

This virtual library is settled at Pier Paolo Pasoini Study Centre in Casarsa for Angela Molteni’s family and her son Lorenzo Ruggero’s desire. Casarsa is the place of Pasolini’s best youth years and Angela always wanted to visit this town. This is a way to express our gratitude to this woman who considered the figure of Pasolini her reason of life and not only a brilliant author but also the perfect guide to let the world known for the accuracy of his cultural reflections, his courage and the independence of the critical thought. Angela felt an “immense respect and gratitude to this poet, intellectual, polemicist and witness. These are the words that she said to Luigi Milani in a 2007 interview where she explained which were the values she gained from “her” Pier Paolo, described as a Pole Star- reference point for everyday life: