Inside the Church of Santa Croce stands a votive headstone which remembers the Turks’ invasion in 1499. The headstone doesn’t belong to this sacred place of Casarsa but it was moved in 1880 from the little church of Beata Vergine delle Grazie. This Church was finished with some paintings and decorations in 1529 when the community of Casarsa put the headstone inside it as a symbol of gratitude for not being invaded by the Turks.

The drama I Turcs tal Friûl was inspired by this votive headstone. This is a one-act play in friulian language, written by Pasolini in Casarsa, probably in May 1944 during the dramatic years of the war and found posthumous in 1976. The text presents a style of “mystery”, between the Greek tragedy and the sacred representations. It stands in the middle among different influences: the fabulous mythological tales of Colussi House given by the mother of Pasolini, Susanna Colussi; the historical fact of the violent wave of the Turks, who brushed Friuli, sparing the town of Casarsa; the cruel acts during the Second War World that convert Casarsa in a place of danger and agitation because of Nazi raids, partisans actions, Anglo-American bombardments which aim at the bridge and the railway on the Tagliamento. 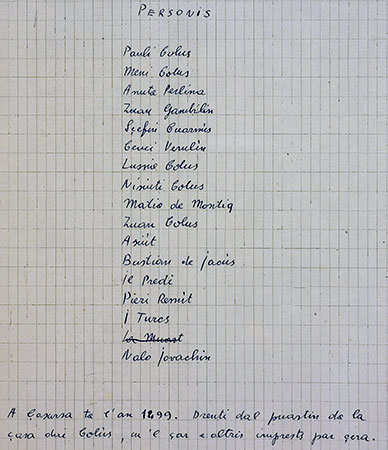 These different sources didn’t leave any documentary or reported mark in the Turcs because they represent only sparks that create a metaphorical sense of an archetypical event, scanned by a ternary rhythm of pain, death and rebirth. Beside this drama of threat, emerges the picture of a small rural community penned at the remote periphery of the world and forced by History to face violence, fear and the hostility towards the “others”. And again, in front of the imminent danger of an end, people discuss and elaborate a plan for possible self-defence reactions: on one hand, the resignation in front of the mystery of fate and the will of heaven; on the other hand, the combative, active and vital spirit even with some aspects of protest. The women guard on men who argue and divide themselves into factions. They share the common feeling of being mothers, emblems of “Mater Dolorosa”, women who experienced pain, suffer in silence and give comfort tormented by a tender compassion. They are mother of intense consoling strength: Lussia and her kind vulnerability; Anuta Perlina and the disillusioned wisdom of whom has already suffered crying; the prayed Virgin, with her superior and ineffable protection. But the only way to dissuade the danger of the young and savage Turks is Death. 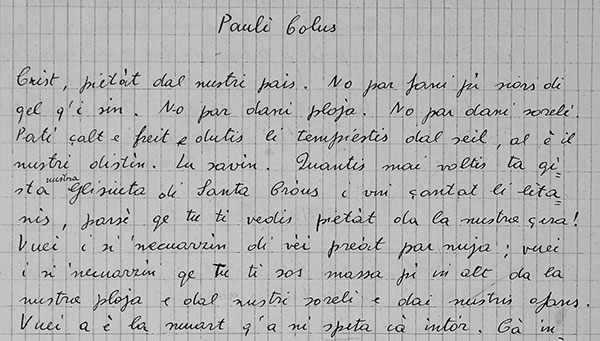 Death carries away the life of the young Meni, who chooses to react to the fatalist helplessness of the others, as the Christ, a scapegoat or a tragic hero of the ancient tragedies. Thanks to his sacrifice he can mysteriously put wound back together, allow a rebirth and facilitate a collective catharsis. In his secret heart, this clear parable about human destiny, which is made up from his origins of an essential truth, interlaces a reflection on death that regenerate life and became an education to it, implacable and inerasable price which lets us out from the Eden and puts us on the difficulties of History. In the end, the wind blows on the little country spared microcosm and then nabbed again by the danger of the dark. This is a pagan and a sacred text at the same time, in which the young Pasolini gave that world a written word, from which come out the gift of feelings and the universal ideas supporting the mystery of life: love, fear, maternal pity, the dilemma between faith-reason and pray- protest, the deliverance utopia.