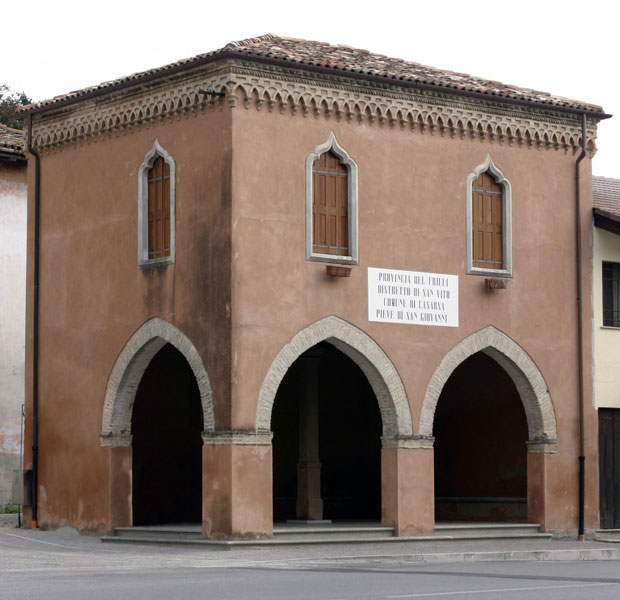 The principal church is usually fortified or surrounded by walls and located near a stream, which represents a further element of defence. This is the urban aggregate around which San Giovanni develops.  The jurisdictional territory of San Giovanni was more extended and included also the currents parish of San Vito, Prodolone, Casarsa and San Lorenzo. Mons. Giovanni Maria Stefanini reports:

San Giovanni probably grew around a defence curtain. It was an embankment fortified by a palisade and surrounded by a moat. There was a single entry and in the centre stands the church. This plan may easily help to hypothesize the structure of the centre of San Giovanni, when the loss of its role throughout the centuries due to the birth of new communities and castles, determined the missing of the curtain and the end of its functions. The first document about San Giovanni dated back to 1186:« Curtem de S, Joanne cum omnibus ad se pertinentibus scilicet villa de Versia usque ad Caxarsam et decimis de S.Vito cum uno manso» this was the description of Pope Urbano III that listed all the civil properties of Concordia. Moreover, during the feudal age, San Giovanni was the location of very important civil Institutions such as the “Placito generale” from 1192, then replaced by the “Gastaldione”, where different disagreements and arguments were settled. We don’t know where the residence of the “Gastaldo” was, but it is supposed to be near the Church, in the area of the Zuccheri complex. The Venetian family the Foscarini owned this structure of medieval origins in 1810. In the first half of the XIX century followed the Zuccheri, who took care of the property until the ‘50ies of the XX century. They indelibly tied in the country memory their name to the rural house, which is today the heart of the country life. In the following centuries the development of the fortified centres such as the Castel of Cordovado (where the monks of Sesto al Reghena found a simple and immediate shelter) reduced the value of San Giovanni that lost its important role delegated to the Captain of Cordovado. In 1349, by request of the Bishop of Concordia, the patriarch Bertrando joined the main church of San Giovanni to the bishop’s refectory. From April 13th 1349 the bishop, who has now become a customary parish priest of San Giovanni, delegated to one of his vicars the practice of the religious cult. This privilege lacked only in 1975 when the bishop (after the laws of the second Vatican ecumenical council) definitely quitclaimed his rights. On October 31st 1377 the Turks, after having defeated the Venetian Army, destroyed the Friuli: they burned and robbed the villas of San Giovanni, Sile and San Floriano and captured lots of prisoners. In 1492 « lots of men of San Giovanni started providing the factories sixty thousand bricks and the lime necessary to built the castle of San Vito and seek refuge in case of war». This was the unequivocal signal that San Giovanni could not provide the adequate defence structures any more.